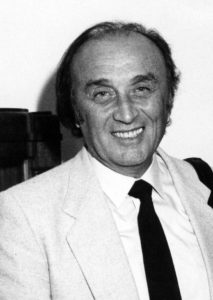 Mark Kopytman was born in 1929 in the former Soviet Union, where he received his early training in piano and music theory and later went on to study medicine. After graduating from medical school and while practicing medicine, Kopytman studied composition with Prof. R. Simovich at the Lvov Academy of Music and with Prof. S. Bogatirev at Tchaikovsky State Conservatoire in Moscow. After gaining his second PhD in 1958, Kopytman taught at the music academies of Moscow, Alma-Ata and Cisheneu. Several of his compositions (including the opera Casa Mare ) won prizes and distinctions in competitions and festivals

In 1972 Kopytman immigrated to Israel, where he was appointed Professor of Composition at the Rubin Academy of Music and Dance in Jerusalem, a position which combined compositional and pedagogical pursuits. Kopytman served as Chairman of the Theory and Composition Department, and later as Dean and the Deputy Head of the Academy (1974-1994).

Kopytman’s compositional classes raised dozens of composers who gave gone to hold prominent positions as composers and teachers all over the world. In 1979, Kopytman was invited to teach as a permanent Guest Professor at Hebrew University. He has since led seminars and master classes in composition, especially in heterophony, a main focus of his creative world, at universities and music schools throughout Europe and the United States.

During 1982—1983 and 1988 –1989 Kopytman was a Visiting Professor at the University of Pennsylvania and in 1985, Composer in residence at Canberra school of Music (Australia). In 1991 he established the Doron Ensemble for the performance of the 20th century music. The year 1991 saw him as a judge at Gaudeamus Competition for Composers in Holland, while 1992 provided the opportunity to lecture at the Seminar for Young Composers in Kazimierz Dolny, Poland, and later in 1994, at the Chopin Academy of Music in Warsaw.

During this period Kopytman developed a strong individual style, inspired by Jewish folklore and combined with economical use of recent innovations and characterized by a strong accent on melodic lines in the web of heterophonic splitting of textures. Numerous performances of his works have been held in the USSR, and later with increasing frequency, in Israel, Europe, the Unites States, South America, Canada, Japan, Korea, Australia, and most recently in the republics of the former USSR

Kopytman is recipient of several prizes; among them the prestigious Koussevitzky International Record Critics award for his orchestral work Memory (1986), the Israel ACUM prize for his lifetime creative achievements (1992), and Israel Prime Minister Prize (2002).

In 1986 Mark Kopytman was awarded the Koussevitzky International Record Critics Award for the composition of his orchestral work Memory. That year the award was split between Mark Kopytman and Witold Lutoslawski (for his Third Symphony). Since then, Memory and other of Kopytman’s chamber and orchestral works have gained wide international recognition. In fact, worldwide critics highly acclaimed him “as one of the fairly rare breed of modern composers: his music is both advanced and ethnically/culturally identifiable” (Fanfare Magazine).

After his immigration from Russia to Israel in 1972, Kopytman soon became one of the foremost modern Israeli composers, with a strong personal and ingenious voice. The discovery of the world of Oriental Jewish music brought him to innovative use of the ancient concept of heterophony – a kind of texture with simultaneous sounding of several variants of the same main idea. Expressiveness of melodic contours, fluctuation between lyric cantilena and narrative dramatic gestures, richness of orchestral colors stamp the imaginative world of his music.

The very title, “Memory”, is in many respects symbolic of Kopytman’s music. In many works of the last period a deep stratum of the historical memory is permanently presented – almost unintentionally at times. Even the titles of his works – Kaddish, Lamentation, Memory, Beyond All This – can be seen as a key to the innermost essence of his music, of its connection with destiny and spiritual heritage of Jewish people.

The text of this page is available for modification and reuse under the terms of the Creative Commons Attribution-Sharealike 3.0 Unported License and the GNU Free Documentation License (unversioned, with no invariant sections, front-cover texts, or back-cover texts).